Practice Notes – Dealing with the Spanish

For six of the last seven months I’ve been working over a fencer of the Spanish school. Though he is taller, and has a longer reach, my greatest difficulty was deciding if I wanted to throw a stocatta to the face or an imbrocatta to the chest after taking his hand and arm in quick succession.

For the last month things haven’t been going so well. He has found that perfect stance that allows him to easily dominate my sword without exposing his hand and arm. Even more annoying, any beat or disengage on my part elicits a fatal response. Sure I could break measure and reengage along another line, but I cannot safely seek wide measure without the Spaniard once again gaining my sword. 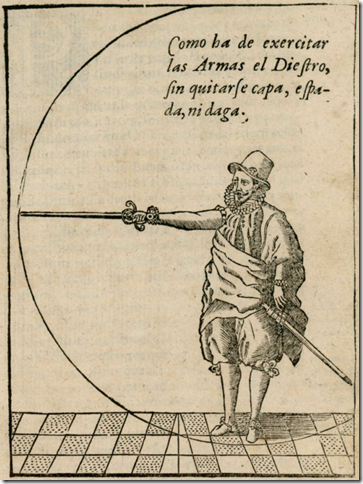 Though I was too ill to spare at full speed, we were able to devise to stratagem using slow work that may prove to be most fruitful.

First I tried going low, basically trying to recreate plate 14 from memory. It looks like this in theory:

But in practice usually ended up more like this:

Then I remembered plate 7 in which Capoferro discusses what to do when being constrained in third by an opponent in fourth. If our fencer C tries a normal disengage to the outside, he will be easily by constrained and struck by fencer D. But if is more artful in his disengage, options emerge. Caopferro continues…

But yet I say that if C had been a shrewd person, when he disengaged he would have disengaged by way of a feint, with his body somewhat held back, and D approaching confidently in order to attack C, C would have parried the enemy’s sword to the outside with the false or the true edge, giving him a mandritto to the face or an imbroccata to the chest, and in such a conclusion would retire into a low quarta.

Against the Spaniard, the false edge parry described above is remarkably effective. I throw it like a beat, with a quick snap of the wrist, and then immediately return to my line. Since this starts with his sword already over mine, no preparatory action is needed on my part. And even if he did anticipate it, he cannot go anywhere without opening the line for me.

I have not yet tried Capoferro’s other option, the true edge parry followed by an imbrocatta. Given the angles involved, I foresee that being of a counter-thrust in first than a beat.

While Capoferro is all about making his guard work in any situation, Fabris seems to prefer having a variety of counter-guards to deal with different problems.

First, I need to find a way to constrain his sword. I can’t go higher than him, and even matching him requires me to adopt his guard. And he already knows where all the weak spots are if that guard is not perfect, so that’s a non-started.

In chapter 7, Capoferro mentioned that some people try to constrain a sword from beneath, but then derided it as an ineffectual technique. I didn’t even bother putting that in my notes, as I thought the whole idea silly. But the fact he mentioned it all suggests that someone thinks it can work. And I believe that someone is Fabris: 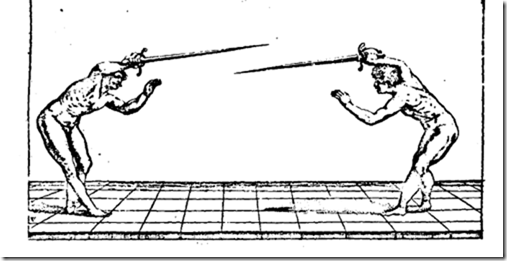 In this plate, Fabris has out fencer in prima with the true edge upwards. I’ve tried this before with some success, but not much. But in this case my opponent’s sword is very high, forcing me to be beneath it. And the horizontal nature of his guard almost removes the distinction between his true and false edge, usually to his advantage.

And that’s why this works. In this guard, and the high second shown below, I am literally constraining his sword from beneath. It isn’t an instant win for me, but I’ve changed the dynamics so much that we’re playing an entirely different game. A game that gives me lots of options, something I didn’t have last week.

In chapter 16,, Fabris offers advice for fighting someone who is taller. He speaks of lying in wait, finding his sword, and attacking with a pass. This version of prima and seconda seem to be tailor made for doing just that when going against the Spaniard.

I am really starting to see a difference between Capoferro and Fabris when dealing with problems.

Capoferro seems to be all about learning a very small set of guards and perfecting every possible option from those guards. Mutations, i.e. transitions from guard to guard, are rare. The Spanish system is the same way, with a limited number of positions and actions that need to be honed to perfection.

Fabris seems to prefer a large tool chest with lots of variety. If something doesn’t work don’t worry, you’ve got half a dozen other counter-guards to choose from. All six may be called seconda, they they are not the same seconda. And in fact, Fabris warns that each has a weaknesses that can be exploited if you linger in one guard too long. A fact that I was able to exploit against the Spaniard until very recently.

Concluding Thoughts: Which school is best?

The Spaniard I spar with was able to make the limited actions of his school really pay off. It required extreme dedication to perfecting a technique that, for six of the last seven months, simply was not working. He was able to overcome constant set backs, despite any visible sign of progress, to achieve a level of mastery that I have rarely seen.

That’s not me. I am a dabbler, a collector of knowledge, and a hoarder of techniques. I have not perfected leather working, welding, jewelry making, metal working, wood working, or any other craft. But I can do them all well enough that, if I cannot achieve my goal with one, I can effortlessly switch to another and thus combine their strengths. So for me, the route of Fabris seems more appropriate. While I don’t have the patience to perfect any one guard, I have the thirst to learn the multitude of counters to solve any problem.

This entry was posted in Capoferro, Fabris, Rapier, Spanish and tagged practice-notes, problem-solving. Bookmark the permalink.

1 Response to Practice Notes – Dealing with the Spanish