Stand with the left leg in front and lift your sword above your head with extended arms (as in illustration). Then spring in towards him with the right foot and strike with the long edge directly to the top of his head. Then sink the point downward to his face or chest.

This play begins somewhat contrary to what I recommended yesterday. I say somewhat for it does not say what the other person is doing. Were the right fencer just standing there he could easily counter-cut the blow to his head. But if he just missed his swing then Mair’s advice works easily.

Dwell on this at your leisure, we move on to the counter.

When he then does the Schaitler to you, displace it with the Kron (Crown) such that the point and the hilt of your sword both stand above you.

The kron is the most base of parries, but don’t discount it for it works even when one panics. And if one does it with control then it can be followed with a short edge cut. This parry and attack are known as the Kronhau by Meyer.

If he then fires out to thrust the point upwards towards you, wind your sword through under his Kron with the edge against his arm and with that cut him over both of his arms. 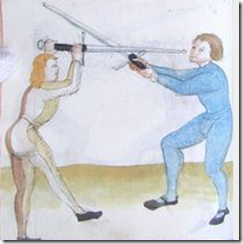 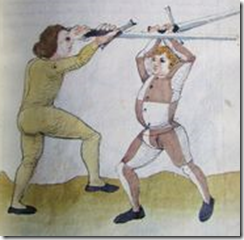 If he cuts over your arms like this, then step back with your right foot and set his cut aside with the Krumphaw with your short edge and with that cut to his right side.

This one took us a few tries to figure out. The krump isn’t like what we’ve seen before, where you strike the strong. Rather, you aim for the middle of his sword as you step back. And then with his attack so deflected you proceed to wound whatever you find on his right.