Posted on December 3, 2013 by Grauenwolf

Having established yesterday that feet are allowed to be crossed, we would like to reexamine Guardia di Sopra il Bracco. First, the text:

The fourth is called “guardia di sopra il braccio” because the hand that grips the sword comes to lie in the manner of a cross in the middle of the left arm, holding the point to the rear, and in consequence the buckler arm is very extended toward the enemy.

Regarding the feet, I say that in this first manner the right must be only so far forward of the left as not to touch it. One could furthermore do this same guard when the right foot makes the pace large, bending itself inward somewhat with the height of grace. And thus arranged in this guard, although the sword hand does not move from the place where it was above, that is, from the middle of the arm (because otherwise it would change the name for the reason said in the first guard) nonetheless the arms would come to elongate themselves somewhat, which previously were tucked in, so that the right shoulder comes to face opposite the enemy in the manner of delivering a blow to him wherever it seems best to you.

Now for the illustration. Oh wait, we don’t have one. So what do we do. Well if you are like most people you’ll turn to a modern drawing. The one I used was by Giovanni Rapisardi.

But there are a few problems with this. That right shoulder hasn’t really come forward, the fencer is still fairly square to his opponent. Nor is the right foot turned inward.

Well, Paulus Hector Mair was only a few decades removed from Manciolino so lets take a look at this illustration of a similar guard.

The shoulder is definitely forward, the the foot is turned outward. So it isn’t quite what we’re looking for. Let’s try another one.

Bingo. The feet are in line, bringing the shoulder forward. The right foot is turned inward, just as the text describes. Checking the upper red line, we see the right heel is lined up with the ball of the left foot, so like in Guardia Alta we have crossed feet.

Mair offers no more examples of this guard, but MS I.33 has something very similar in Third Ward or Left Shoulder.

Again, the feet are crossed, drawing the right shoulder forward. The orange line you see wasn’t drawn by me, I merely darkened it to be more visible. That is a guideline used by the original illustrator so that he could precisely place the feet.

There is more to see in this picture. Consider the back ankle:

This isn’t a mistake, it was drawn like that intentionally. When you roll your ankle like that the bones in the subtalar joint lock together, giving you stability. Specifically, the Fibula slots into the Talus. If you have a poseable skeleton this becomes clearer, but you can experimentally prove that it is better than being flat footed with a partner. 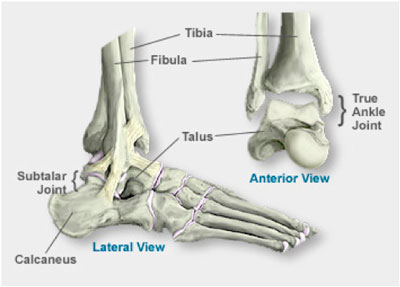 If the foot was rotated, the green line through the toe and ball would extend to the heel. Since it doesn’t, our fencer must be up on the ball of his foot. But why?

This is a defensive position. You are not in the middle of a cut; you’re done. The momentum of your swing has pulled your body out of harm’s way. Your weight is on the back foot, ready to spring forward with the next attack. Your front leg is drawn back some, not a lot but some, so that you are ready to explode outwards again with the next strike.

This reminds me a lot of the classic sabre drill except the buckler is used for defense instead of a hanging parry.

This entry was posted in Antonio Manciolino, MS I.33, Paulus Hector Mair, Sword and Buckler and tagged sopra-il-bracco. Bookmark the permalink.