Giacomo di Grassi – How to Hold a Shield

Holding your shield close to the body, either to the side or directly in front, is certainly historic. We know this because Giacomo di Grassi specifically tells us not to do it. And he wouldn’t be telling us not to do something if people we’re doing it.

His primary objection is that the shield blocks the user’s vision if you turn it so that the face points towards the enemy. He argues that if you want to see your enemy below the chest you need to lower the shield, and get hit, or peek over the top, and get hit.

So instead di Grassi tells us to extend the arm, if not fully then as much as you can. The convex side of the shield will fully defend your left side while the inside rim, with a small movement of the shield, will defend your right. 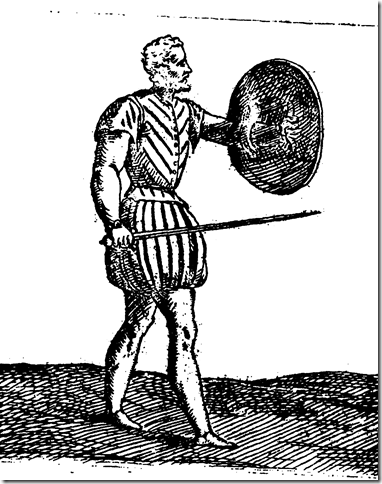 According to the text, di Grassi wants you to hold it just far enough to the left so that you have an unimpeded view of your opponent without needing to move the shield. That makes me a bit nervous so I let it float a little to the right so I can’t be tagged by a quick thrust. I’m sure I’ll stop doing this as I gain more confidence with this stance.

So far we’ve tested this stance with both synthetic arming sword, longswords, and steel rapiers. Against all of them it has proven quite effective, much more so than any of closely held stances we’ve tried in the past. In all tests we were using a 23” rotella which is comparable to the one in the illustration.

I haven’t had a chance to try it out in SCA heavies yet. While I think it would be foolish to use in a shield wall, in a tournament it should prevent the opponent from closing and playing the silly back of the head game. Running into the edge of someone’s shield isn’t fun and if you tried then your head would be much close to my sword than my head is to yours.

I also like how it essentially eliminates the pivot problem. When the face of the shield is forward, a strong thrust to the top or bottom edge can table it, allowing the point to continue to the head. With the edge forward you can only table the shield with a cut. And that cut has to be directed laterally away from you, so it poses no real danger unless they have two weapons.

Were this a center-held round rather than a rotella the pivot problem becomes a tactic. With the edge forward, pivoting only occurs when a lateral cut is directed at the front edge. And even then, the arm prevents it from pivoting to the left.

If someone strikes the front edge with their sword then you’ve pretty much won. Just step forward and to the left, trapping their sword between the face of your shield and their body or shield. And while you are over there, go ahead and hit time on the side of the head.

If they use the shield to pivot yours the technique changes slightly. As you can see in Roland’s demonstration, an offline step to the left would be disadvantageous. However it does leave the center line open.

This entry was posted in Giovanni dall’Agocchie and tagged shield. Bookmark the permalink.

3 Responses to Giacomo di Grassi – How to Hold a Shield