Why do you lean back with the rapier?

We often see people leaning backwards with the rapier. Why do they do this? Well there are a number of reasons. Capoferro writes,

The purpose for the vita to be bent thus is: first, because in this way you are more lengthened and more covered and this is better to guard and defend the parts that can be offended because a target that is more distant is much more difficult to strike. Moreover, as well in striking it carries the attacks longer, quicker, and with more strength. Therefore, the offenses coming from far away are much more secure and best.

One of the reasons I like the lean is that it is deceptive. My opponent can’t easily gauge the distance between us, yet I can still keep my arm extended for my safety.

If my opponent moves in, I can quickly shift to a balanced stance, without moving my feet, in order to gain control of his blade. You can see this stance in plate 15 wherein fencer C (right) constrains fencer D. 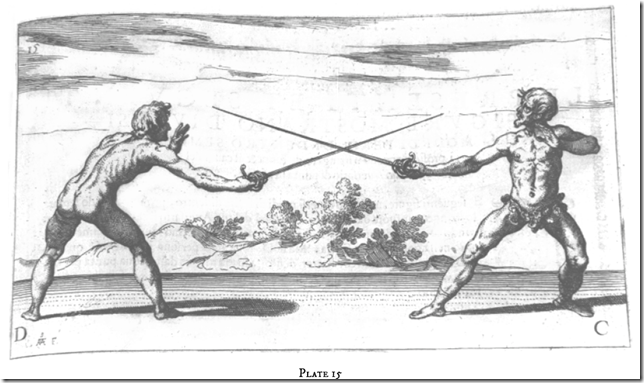 Note how fencer C, though not leaning, is still carrying his weight back. As you can see from the illustration, this keeps him further from his opponent’s point than the opponent is from his. And as Capoferro stated, he is ready for the attack.

This entry was posted in Capoferro, Rapier. Bookmark the permalink.